Displays are a big part of how we build expression into the design exploration work we do at the Smart Interaction Lab, and LED matrices are particularly compelling as they allow us to have lights that glow beneath a surface and disappear when not in use. Currently, we are working with a 32 x 32 RGB LED matrix that’s about 5″ square and share our experience with displaying type here in this post.

For starters, Adafruit offers a library that allows for drawing functions and displaying text on the matrix. The library is preloaded with a generic font, if you want to have custom typography or even iconography mixed in with the type, you’ll want to create your own font. We came across this challenge, and decided to reverse engineer the library files.

In order to create our own font we modified the glcdfont.c document within the Adafruit-GFX library folder. This document stores the program memory, which has the code for each character of the ASCII table. The first thing that we should notice is that the font is going to be 5 x 7 pixels.  When you open glcdfont.c, you can see that the font is a series of hex values separated by commas under a font[] array. The PROGMEM  is the memory of the array that has each character value. I have commented on green the ASCII value for each series of  hex values that comprise each character. Make sure that you use that when you do this, you utilize these symbols:  ”// comment ” or “/* comment text*/” 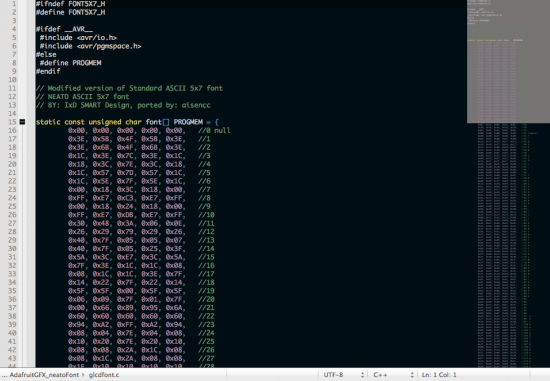 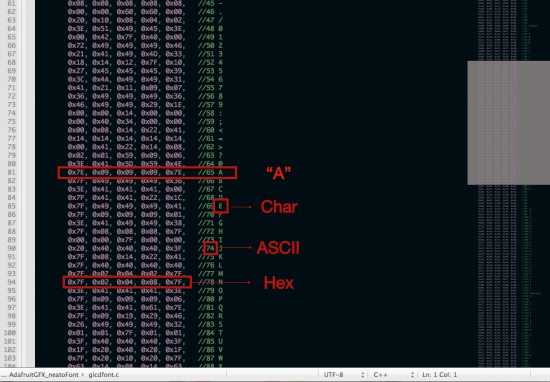 In the image above you can see that the capital letter “A” has a value of 65, since all ASCII symbols are represented in this file, all of the characters are in that numerical order, so “A” is line number 65. Each character is defined by hex values, which  are a shortened version of binary values. Each binary string is translated to five hex code bytes, each byte represents a line of seven 1′s or 0′s each representing either an “on” or “off” pixel in a glyph, but they are flipped 90° to the right.

We used excel to redraw each of the glyphs and extract the hex value of each line using their handy conversion function “=BIN2HEX(1111110)” which will return “7E”. Add “0x” for the correct formatting of “0x7E”, and you will have the first byte of the capital letter “A”.  The second line will be ”=BIN2HEX(1001)”, which returns “9″ this time we add another zero in front which would be “0×09″, and would keep our format uniform. Each of these hex values are the separated by a comma,  and each character or glyph has five pixels in width which has been previously defined. The size of each character is 5 x 7 pixels, and can be enlarged proportionally via other functions within the Arduino code, such as ”matrix.setTextSize(1).” 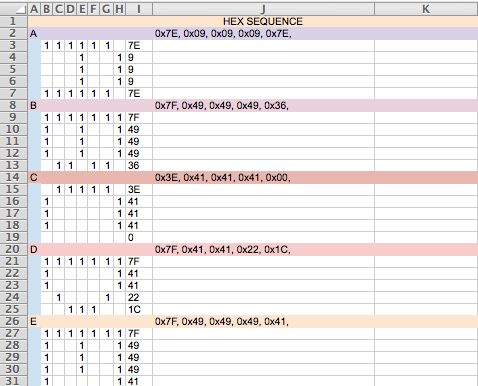 If you are interested in creating your own fonts, here is the link for the Smart IxD modified file glcdfont.c: glcdfont NeatoFont

Here is the excel file that shows how arrive at the hex code: NeatoFont