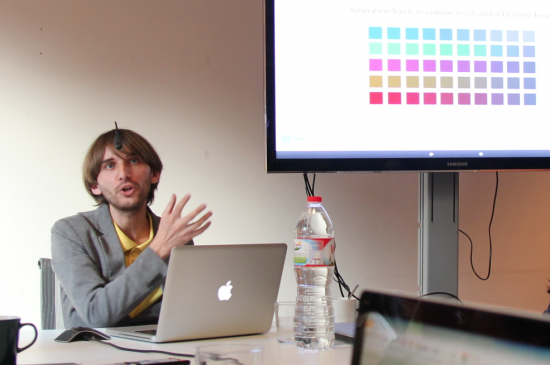 Last week as part of our Get Smart inspirational internal lecture series the Barcelona studio hosted a talk by Neil Harbisson, a Catalan-based artist, performer and self-proclaimed Cyborg, who regularly wears a distinctive antenna-like protrusion that sits above his head in order to amplify his perception of color. As he’s done recently in many talks, including his popular 2012 TED talk, he talked about his story of being born with achromatopsia, commonly known as color-blindness, or the inability to perceive color beyond black, white and shades of grey.

After attending an inspirational lecture on cybernetics at Dartington College of Arts, Neil decided to work with a technologist on what he calls the eyeborg project. Through this project, he created a device with a head-mounted camera that will map color pixels to sound waves, so that the wearer can essentially “hear” colors. A technology developed by a student at the Universitat Politècnica de Catalunya allows people to have a chip implanted to go along with the device to actually perceive colors that the average human can’t normally see.

In addition to telling the story of the development of the eyeborg, Neil shared some deeper stories about his pursuit of cyborgism. He described his commitment to wearing his prosthetic on a regular basis so that it essentially became a part of his body, and he shared stories of other people’s reactions, including some challenges around anti-cyborg intolerance.

Neil is proud of his victory in convincing the UK passport office that his eyeborg should be included as part of his official passport photo, reinforcing his identity as a cyborg. This Wikipedia entry does a good job of summarizing his story: http://en.wikipedia.org/wiki/Neil_Harbisson