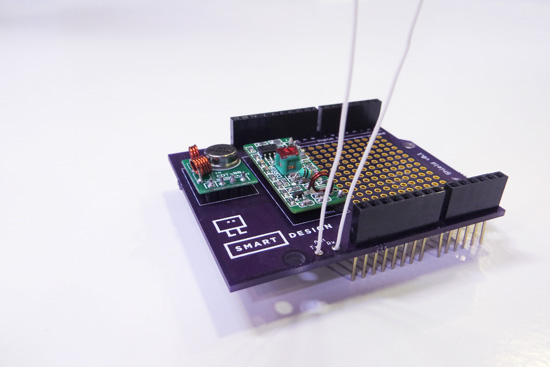 At Smart Interaction Lab we sometimes create our own circuit boards for physical models in order to have internal parts with exactly the components we need in an efficient form factor. We love using off-the-shelf boards from sources such as Sparkfun and Adafruit for fast solutions, but making great prototypes sometimes requires going one step further.

Since we know many of our readers face the same situation with their own projects, we decided to share our process here. The most recent board we created was made to work with one of our favorite new toys, the Ninja Blocks, a quick and easy kit consisting of a WiFi hub and sensors for exploring Internet of Things in the studio. This post lays out the process we went through to create our own custom RF Arduino Shield for NinjaBlocks.

When the folks from NinjaBlocks came to visit us in the San Francisco studio this past summer, we were excited to start playing with their product, as it offers an easy, quick way to experiment with design ideas for Internet-connected objects. The NinjaBlocks kit ships with a few basic sensors: temperature and humidity, motion, window/door contact and simple push button. These are great for wiring up a space to monitor it online, or setting it up to trigger an email, tweet or update to a website. While playing with the setup we quickly realized that we would want to go beyond those basic sensors so that we could try to use it with anything we needed like a force sensor, moisture detector, light sensor, etc. 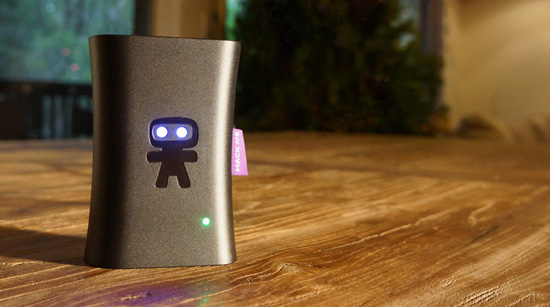 Since the NinjaBlocks hub communicates with its sensors over radio frequency, it’s something that we could easily tap into, and there are helpful guides on the NinjaBlocks website which outline how to use it with your prototyping platform of choice (we used an Arduino).

The guides give instruction on hooking up the Arduino and RF components using jumper wires from a breadboard, and though this is a great way to get started right away, we’ve found that things get messy quickly. Once you begin adding more components like sensors it may end up looking more like a Medusa head of wires than anything else. Hence what this post is really about, making an Arduino shield! 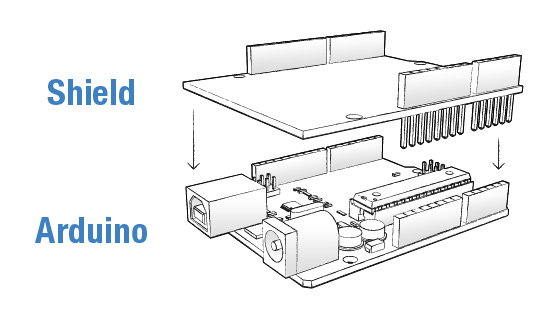 An Arduino shield is essentially another circuit board sitting on top of the Arduino which adds capabilities which the Arduino does not have. Instead of connections happening through a bundle of loose wires, everything is neatly integrated within the layers of the circuit board and the components on it. Since it easily plug into and out of an Arduino, it also allows you to swap out shields as needed for different projects. The board can be designed using software and then fabricated via a printed circuit board (PCB) facility.

Since it’s always good to prototype what you’re doing first, we started with a breadboard, and then later used an all-purpose protoboard (available at hobby stores like Radio Shack), cut it down to dimensions, soldered connections to match the Arduino and hooked up the RF components. 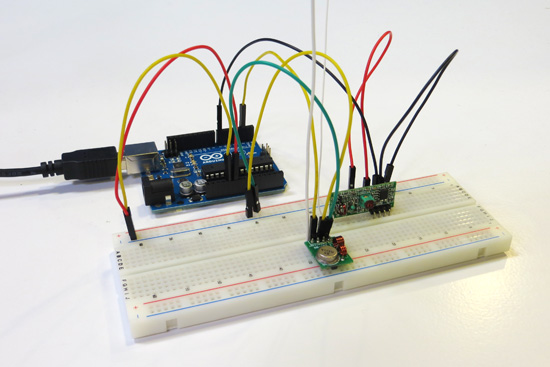 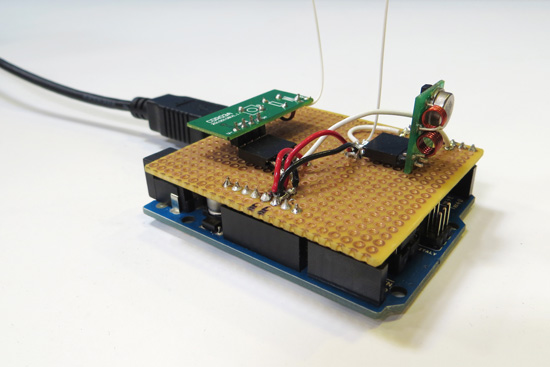 Once our protoboard was working (hurrah!), we knew exactly what we needed, and we could move on to the design of the the PCB. Though there are a growing number of  home-brewed DIY solutions for making PCBs (such as using laser printers, printing on transparent sheets, exposing and etching away parts of copper coated circuit boards, etc.) we wanted something very reliable and repeatable, without having to deal with corroding chemicals. Thus we chose to have the manufacturing process outsourced to one of the few companies which can do small batches of PCBs fairly cost effectively. 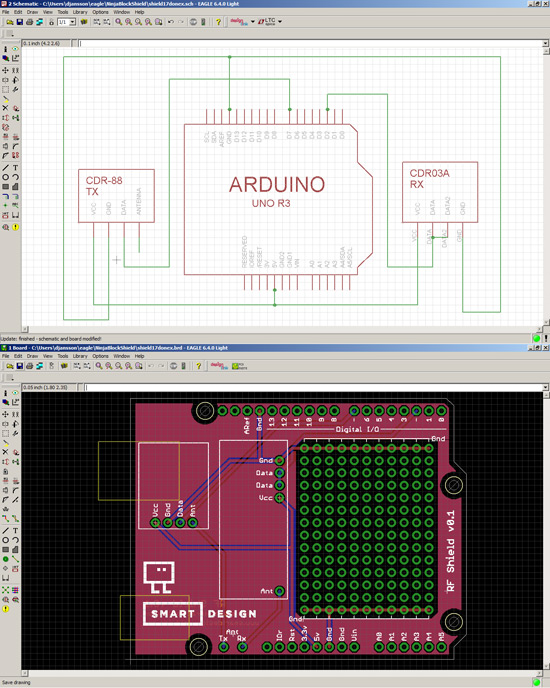 The shield was drawn up schematically and then laid out in a program called CadSoft EAGLE. It’s the same tool used by professional engineers, and they offer a limited version for free for hobbyists to make their own boards. Incidentally, many DIY electronics companies, such as SparkFun, Adafruit and Arduino, offer EAGLE files of their components, which makes building on what they’ve done much easier than having to reverse engineer and recreate a part from scratch. Our shield was made by modifying an EAGLE file of a shield to make sure all the necessary holes and pins would be in the right place.

EAGLE can be daunting at first, and drawing out a shield can take quite some time, but with the help of online reading and YouTube tutorial videos even a beginner can get started. There are also many other circuit board layout programs, among them the open source alternative KiCad and the online editor Circuits.io which we’ve mentioned in a previous post, which may give an easier way into creating circuit boards when you’re starting out. 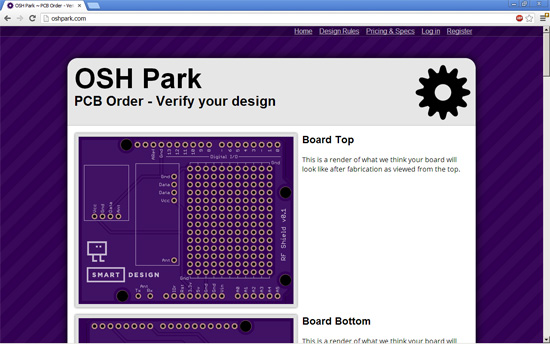 After going through a few iterations of designs in EAGLE the finished version was finally shipped off to OSH Park to have it made. While the turnaround time for smaller batches of PCBs can be quite lengthy (we waited about three weeks) they’re still cheap enough to make it worthwhile. It is also a good idea to prototype as far as possible before committing the design to an actual PCB, to make sure the circuit works and everything is laid out properly. It’s better to spend an extra day laying out everything than getting your board back after a few weeks to find that it doesn’t work. 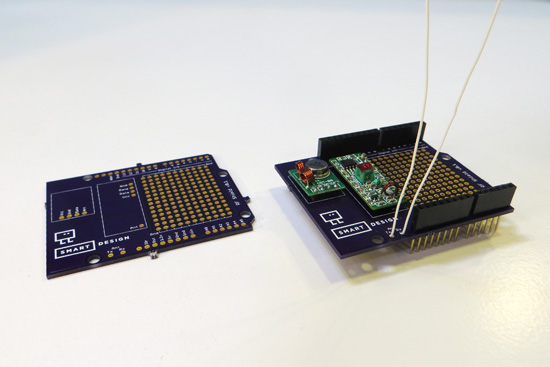 In the end, after soldering in the RF modules and header pins to the shield it was working beautifully.  (And there’s added bonus to creating an RF Arduino sender-receiver setup, which is that we can use it to communicate back and forth between individual Arduinos as well as with the NinjaBlocks.) Since the RF modules only take up two digital pins on the Arduino you’re still very free to hook up sensors and actuators to trigger whatever your imagination could think of. How would you use it?

If you’d like to try making the shield yourself, you can download an updated version of the Eagle file, along with documentation and links to Arduino libraries. These files will enable you to order your own, or modify it to fit your own needs better. Enjoy:

Special thanks to Smartie Daniel Jansson for sharing this process.