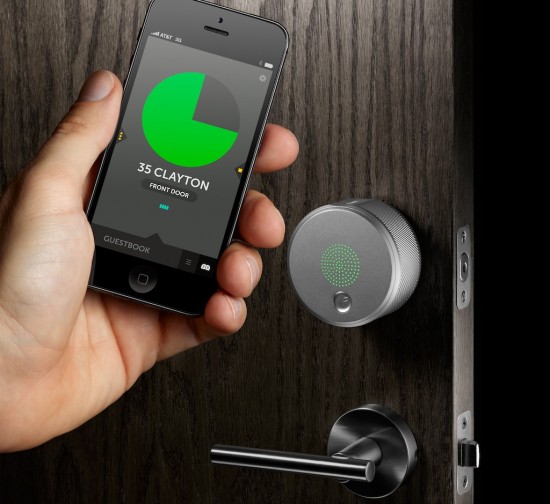 It’s long been a sci-fi fantasy to have doors that automatically recognize you, and selectively choose whether or not to grant access to other people who approach it. With internet-connected Internet of Things systems we are one step closer to making that fantasy a reality. Since  Smartphones can be used to communicate with a lock, and the lock itself can be connected to an online database, new products can offer selective keyless entry based on conditions set up by the lock’s owner. A cloud-based service can be used to organize and control who has access to our home and when.

Here are a few products in this realm that we’ve had our eye on: 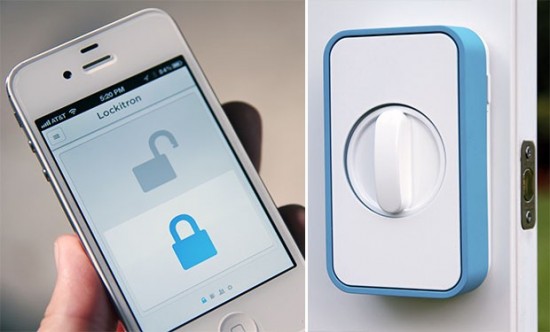 Lockitron, shown above, was the first on the scene with their Kickstarter campaign in early 2011. Originally set up as an entire lock, they are now offering a product that’s an add-on to existing locks. Through a combination of Bluetooth 4.0 and wifi, almost any smartphone can be used to control the lock from nearby or a remote location.

August (shown at the top of the post) is the slickest of the bunch, with a pretty glowing face and robust look. It communicates with a Smartphone over Bluetooth, and then the app handles interactions with the server. The product description also boasts the ability to distinguish whether a person is inside or outside. The company’s video does a nice job of explaining why you would want one of these.

Goji, above, is a relative newcomer, and is similar to August and Lockitron, but with a few additional features such as a camera that can use WiFi to send you a picture of who is at the door, and key fobs that you can give to kids or others who might not have smartphones. It also boasts the ability to know whether you are inside or outside.

While all this satisfies a sci-fi fantasies, the realists among us are wondering just how safe this can be. If I have one of these locks in place, can my home become prey to burglars via hacking? The answer seems to be yes and no, and Gizmodo’s Peter Ha does a good job of laying out the pros and cons, and scrutinizing Bluetooth 4.0/LE/SMART along with WiFi in terms of overall security:

It’s clear that the Internet of Things is upon us, and products such as these will be entering people’s homes regardless of security risks. We hope that as they become more sophisticated, their ability to thwart would be hackers becomes increasingly better.